Father of the Bride Speech Fail! 5 Great Ways to Really Screw It Up 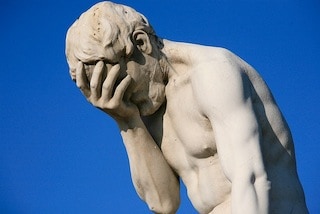 You’ve worked hard on your Father of the Bride speech.

There’s nothing you want more than to see her beaming with pride.

But somehow, against all the odds and despite all your best intentions, you manage to totally screw it up.

It’s a serious case of Father of the Bride Speech FAIL! But it could so easily have been different.

Here’s my guide to 5 Great Ways to Really Screw Up Your Father of the Bride Speech.

Avoid these like the plague - or follow them to the letter if you’re still determined to go down in flames!

1. Make It All About You

Yes of course the focus of any wedding is the bride and groom, but let’s not forget, you’ve played an important part too. So make sure your Father of the Bride speech plays up your role as the generous host of the whole event.

Even if you haven’t paid for the whole thing (which you probably have) it’s important that guests at least get a sense of your important contribution, so why not point out a few of the things that wouldn’t have been possible without your help (or more likely, money)?

If it helps, try to think of the occasion not so much as a wedding, but more as a fantastic party you’ve generously thrown to celebrate your daughter’s marriage.

Your Father of the Bride speech should practically demand recognition and respect. You’re like The Godfather and it’s the day of your daughter’s wedding.

We all know it’s the best man’s job to embarrass the groom in his speech. Humiliating details from his past are the jewels in the crown of the best man speech - that’s Wedding Speech 101.

But is it really fair if the groom gets dragged across the coals by his best man while the bride remains completely unscathed?

After all, she’s got a few amusing skeletons in the closet too. And who better to dig them out than the first (and some would say most important) man in her life - her father?

That childhood photo of her in a swimming costume when she was going through her “chubby” phase? Blow that up to poster size for the amusement of the guests.

And that story about the time she got dumped by her teenage sweetheart and literally cried for an entire week in her bedroom? Her friends need to hear that!

By the time you finish talking, if your daughter’s not holding her head in her hands, you’ve not done your job properly.

Sure, your daughter’s wedding is a very special day and it’s absolutely right that she’s the centre of attention. But at any half decent wedding there’s more than enough limelight to go around.

So why not finally get started on that secret dream of becoming a standup comedian?

Wedding guests are supposed to be the friendliest crowd in the world, so what better day to try out some of those hilarious ideas you’ve been scribbling on napkins over the years?

Obviously, your jokes are completely untested and don’t have very much to do with the occasion, but as long you mention the bride at the start and end, no-one’s going to blame you for testing out a potentially killer standup routine in the middle of your Father of the Bride speech.

After all, what better way for everyone to remember your daughter’s wedding than as the day you became the new Chris Rock!

It’s very rare to have the whole family together in one place. Rarer still that they’re all listening patiently to what you have to say.

So you’d be crazy not to use your Father of the Bride speech to score a few points off some of the more ‘deserving’ members of the family. They’d definitely do the same in your shoes.

There’s no need to go over the top. Perhaps just one little joke at the expense of Cousin Margaret who, let’s face it, has done nothing but interfere with the arrangements since she heard about the engagement.

And you could have a friendly dig at Uncle Roger’s drinking problem - “Yes Roger, there is a free bar, but please let’s not have a repeat of David and Susan’s wedding!”

5. Avoid Sentimentality At All Costs!

Your daughter has grown up with you as a stoic rock of strength. Even during some of life’s most important moments, she can rely on you to be completely unmoved while all around let their emotions run riot.

So last thing she wants is for you to go all gooey in front of her family and friends. She doesn’t want people to suspect that there’s a heart beating under that hard exterior.

Look, she knows you love her - so there’s really no need to say so in your Father of the Bride speech. Who wants to hear a load of old mush like that?

Likewise, it’s totally obvious that you’re proud of her, the decisions she’s made and the woman she’s become. Okay, you might not have actually ever said it out loud, but her wedding is hardly the place to start.

Oh, and under no circumstances treat the groom to a heart-felt, man-to-man welcome as the newest member of your family.

No need in having him think you’re a soft touch from the word go.