5 Public Speaking Secrets You Can Steal From The Pros 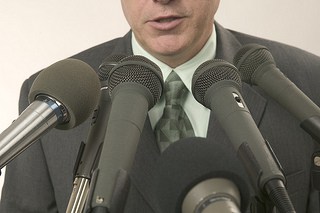 If you’ve got a wedding speech coming up, there’s a good chance it’s the first time you’ve spoken in front of a large group of people.

So it’s only natural that you might feel a little anxious.

The truth is, the best way to nail it is simply to do lots of preparation and practice.

While these secrets won’t turn you into a speaking pro overnight, they might just save you some time and give you an edge when the big day arrives.

Experienced public speakers know it’s really important to start strong, which is why they spend a disproportionate amount of time working on their speech opening.

This is because in the first minute or two of your speech, the audience will be deciding whether or not they’re going to like what you have to say.

It’s the same when you go to watch a film. If it starts well and you say to yourself: “This is going to be good!”, then you relax and give it your full attention. Otherwise your mind starts drifting elsewhere.

So start your speech with a humorous observation or something a little out of the ordinary, like using a prop.

And make sure you start with a loud, confident voice that shows your audience you mean business!

2) There’s Power in a Pause

Nervous speakers tend to speak quickly with few pauses because subconsciously they’re trying to get through the experience as quickly as possible.

Experienced speakers on the other hand know that pauses between ideas add gravitas and give the audience time to digest what’s been said.

The real pros even use pauses to cover brief lapses of memory. They breathe, take a sip from their glass and continue – pretending it was all planned.

Also, a confident pause also makes a glance at your notes look much more natural.

3) Three is a Magic Number

In spoken communication the number three comes up again and again:

This “rule of three” is also popularly used when making a humorous comment or joke. In this case, the first two examples set the pattern and the third breaks it for comic effect.

When writing your speech try to break units up into manageable “triplets”.

A “callback” in a speech is a deliberate reference to something mentioned earlier. One idea literally “calls back” the other.

People love callbacks because there’s a little cognitive ‘thrill’ that comes with successfully making the connection between the two references.

This is another device that can be used to great effect when introducing humour into a speech. Referring to something you said earlier, but in a new context, is a reliable way of getting a laugh of recognition from the audience.

And great way of adding polish to your speech, is to use a callback in the ending which references an idea from the opening. That way, when you finish up, the audience feels that you’ve gone very neatly and cleverly in a full circle.

When people are reading words on the page, they can set their own pace and stop to mull over a point, or go back to review something they think they may have missed first time around.

Of course this is not possible when listening to a speech because the speaker sets the pace.

Sometimes novice speakers feel they need to speak in a more “eloquent” way because of the formal occasion.

In fact this often leads to a speech which sounds artificial and slightly pompous.

If your style is naturally verbose that’s fine, but make sure you speak at a leisurely pace so that people have a chance to keep up with you.

Did you learn a few things you didn’t know before?

Be sure to keep these tips in mind as you’re writing and practicing your speech.

When the big day comes, a few people might even think you are a professional speaker!