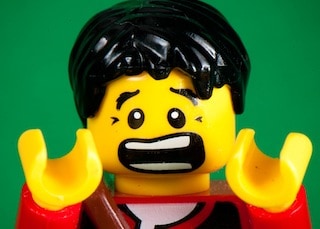 Are you terrified of public speaking?

Would you rather pull out your own teeth than stand up in front of a crowd and “say a few words”?

You certainly wouldn’t be alone.

According to one survey the average person is more afraid of speaking in public than they are of dying!

The best thing to do is just to avoid public speaking altogether, right?

Well that works fine until someone close to you decides to get married and suddenly everyone’s expecting you to give a speech. Total. Bloody. Nightmare.

So what’s the answer?

Well, you could always move town, change your name, and start a new life. It sounds drastic but at least you get to avoid the terrifying ordeal of giving a speech!

On the other hand, you could spend a couple of minutes learning about the most common causes of wedding speech anxiety – and what you can do to beat them…

What are the causes of wedding speech nerves?

On the surface, giving a wedding speech really shouldn’t be all that stressful.

It’s a happy occasion full of family and friends, you’ve got the audience’s undivided attention and everyone wants you to do well.

So why is it so damn scary?

There are a number of reasons why giving a wedding speech is more nerve-wracking than it should be. And fortunately, many of them are under your control and can be greatly reduced with a little planning and effort.

Cause #1: Not knowing what you’re expected to do or say

This first cause of anxiety is really just a fear of the unknown.

Your head is full of questions. What does giving a wedding speech actually involve? There must be certain rules for each speaker, but what are they? And will this wedding be sticking to those rules?

So one of the first things you need to do is some research so you know what to expect and what’s expected of you.

Speak to one of the wedding organisers and find out:

If you are one of the organisers, decide how you want things to run, and communicate it to the other speakers.

Getting some basic information about the format for the big day will make things feel a lot more manageable and hopefully help reduce your stress levels.

When you think about public speaking, it’s difficult not to conjure up an image of a super-confident speaker who totally owns the stage and has the audience eating out of the palm of his or her hand.

But of course the average wedding speaker is nothing like as experienced as a professional speaker. In fact the truth is that most wedding speakers are mediocre at best.

So stop pretending that anyone is expecting you to be as slick and confident as a professional. It’s only going to make you more nervous.

All people will expect is that you give it your best shot on the day, and have put in a little effort upfront.

Cause #3: Trying to be someone you’re not

For some reason, when faced with the prospect of giving a speech, many wedding speakers seem to think they need to transform themselves into someone completely different.

The best man tries to become a standup comedian, the father of the bride suddenly sounds like he’s swallowed a dictionary; and even the groom seems to have turned into a poet overnight.

Pretending to be someone you’re not is a major cause of wedding speech anxiety because it doesn’t feel natural and deep down you’re afraid of looking stupid.

And if you still feel nervous when you finally stand up to speak, it’s fine to admit that. It will help to get people on your side and anyway being honest is a lot less stressful than desperately trying pretend you’re full of confidence.

Cause #4: Not being prepared enough

If you’re anxious about a future event it’s human nature to leave any preparation until the last minute. Basically you want to avoid thinking about the whole thing for as long as possible.

But feeling unprepared as the big day approaches is a huge cause of wedding speech nerves. And the closer it gets, the more anxious you feel, and the less you want to face it. It’s a vicious cycle.

So it’s really important to get something down on paper as soon as possible. Returning day after day to a blank page is not going to do anything for your nerves.

Here are three simple steps to get you started:

(Ernest Hemingway once said: “The first draft of anything is sh*t”. So if yours is a stinker – you’re in good company!)

Think of it this way: the worse your first draft is, the easier it will be to improve when you rewrite!

Cause #5: Trying to be TOO prepared

Yes it would be hugely impressive if you could deliver your entire speech from memory without relying on any notes.

Feel free to enjoy a brief daydream where you’re effortlessly delivering your speech without notes and making clever off-the-cuff remarks at all the right points as you go along. But let’s be honest, if you were 100% confident of being able to pull off a performance like that, you probably wouldn’t be reading this article in the first place!

Doing everything from memory is a high-wire act best left to the professionals. (And it stresses many of them out too!)

So… it’s fine to use some notes. That said, there’s nothing more uninspiring than a wedding speaker with their head buried in a sheet of paper, monotonously reading their out speech word for word.

The perfect middle ground is getting familiar enough with the speech so that all you need is a few small prompt cards with the key points written on them to keep you on track.

This will give you the confidence of knowing you’re never going to completely forget what’s next, but also the freedom of being able to actually look at the audience when you’re speaking.

Cause #6: Having no previous experience whatsoever

If giving your wedding speech will literally be the first time that you have spoken out loud to a group of people, it might be a good idea to get a small amount of experience before the big day.

This could be as simple as practicing your speech out loud in front of a few friends or family. (If you don’t want to spoil the contents of the speech, talk for a few minutes about something else – the important thing is just to get used to the extra formality of speaking out loud.)

Another idea is to ask a few work colleagues to listen to your speech for five or ten minutes during lunch. Find an empty room, provide a few snacks as a gentle bribe and have a quick run-through. You could ask them for feedback – or not. The aim is simply to get a bit more comfortable speaking in front of other people.

Alternatively, if you’ve still got time before the wedding, you could always see if there’s a local public speaking club such as Toastmasters that you could go along to. Many people join clubs such as these precisely because they want to build confidence before giving a wedding speech.

How are your wedding speech nerves now?

Hopefully you’re feeling a little less anxious about your wedding speech now that you understand some of the reasons for your butterflies.

Tackle each of the underlying causes above and you should feel much calmer about the prospect of giving your speech.

Hell, when the day arrives, you might even find you enjoy it!