How to Rock Your Best Man Speech 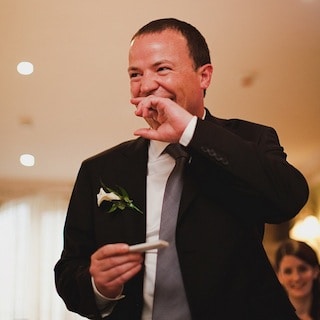 The Best Man Speech is the flagship wedding speech.

Speaking last, he’s seen as the headline act and guests will expect the speech to be revealing and entertaining.

Not surprisingly, you might feel rather daunted by the prospect of delivering such an important speech.

But with the right preparation it’s not too hard to give a speech that totally rocks and leaves the groom feeling proud of his choice of best man.

Want to learn the essentials of the Best Man Speech in just 5 minutes? Click here to download my free guide (no registration required).

Popular wisdom says that a best man speech should do two things: make people laugh and embarrass the groom.

However, while a great best man speech might be both very funny and give the groom a couple of uncomfortable moments, putting too much emphasis on these can lead to a speech that is memorable for all the wrong reasons.

Does the best man speech have to be funny?

Remember, the best man has been chosen for his close relationship with the groom, not his ability to deliver zinging one-liners.

The most successful best man speeches allow humour to arise from genuine observations and true stories about the groom. Yes there can be some exaggeration for comic effect but everything should stem from the facts.

Conversely, some of the most painful speeches arise from trying to crowbar the groom’s life into a set of pre-existing jokes or speech templates.

Does the best man speech have to embarrass the groom?

Most grooms will listen to their best man’s speech with some trepidation. And while a speech that gives the groom no cause for discomfort whatsoever might be a little disappointing for the audience (and secretly for the groom), going too far the other way can leave a bad taste in everyone’s mouth.

Let’s face it, what best man would genuinely want to humiliate one of his closest friends in front of his nearest and dearest?

It’s about knowing how far to go and creating a balance. We want to see a fair fight between the groom’s best and worst moments narrated by someone who’s had a ringside seat.

What’s the real secret to a great best man speech?

I believe the ‘secret’ is very simple:

The Best Man speech should give guests an entertaining insight into the Groom’s life and character from the perspective of a close friend.

This is best achieved through stories and observations that tell us more about the groom than we knew before.

By the end of the best man speech, we should ideally: